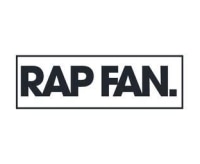 Rap Fan – Best known for his prolific mixtape work and as the tour DJ for Killer Mike, El-P and Run the Jewels, Trackstar the DJ has been putting in work behind the turntables since his start on college radio in St Louis in 1999.

His RAP FAN brand is born of his truest identity–the kid from the midwest who collected and studied hip hop albums like his life depended on it.

He started the brand in 2012, while on the Into the Wild Tour with Killer Mike & El-P, and it has grown into a clothing line rather than simply artist merchandise.