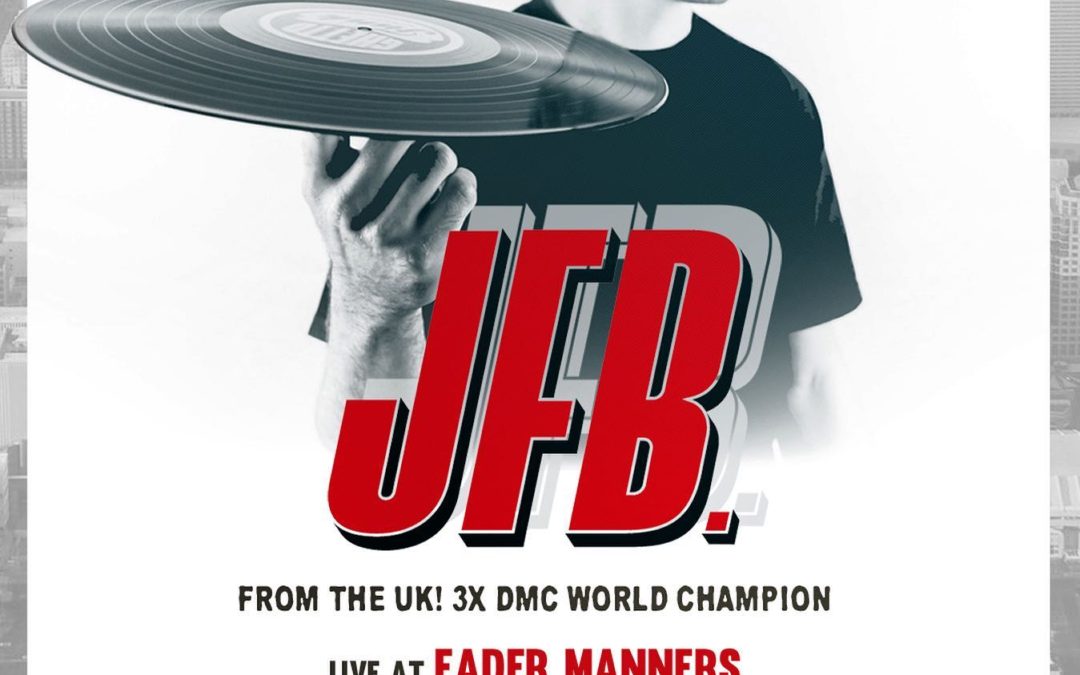 Fader Manners will be at Trill Hip Hop Shop on Friday, February 18th with special guest JFB! That’s right, you can catch the 3 time DMC World Champion live and direct at this months scratch get together. This is huge to say the least.

JFB hails from Brighton, UK where he started off playing Drum & Bass on a local pirate radio. He began scratching and rocking hip hop parties around Brighton. As time progressed, JFB began focusing on turntablism and playing other styles of music such as Breaks, Dub, Jazz and Funk. And now, 25 years later, he is a 3 time World DMC Champ. Hard work, dedication, and practice certainly paid off for the Brighton tablist.

In 2021 JFB wrangled in 3 world titles… The DMC World Final, DMC Beat Juggling Champion, and the DMC Team Champion along side partner DJ Angelo under the name BREXecutioners. Although the most prestigious titles to date, he also has a stack of other titles he has accumulated during his career. In 2020 he was the UK DMC Champion & Vise World Champion. In 2019 he claimed the UK IDA Champion title. In 2016 he was the RedBull 3style European & African Region Champion. In 2015, 2011, and 2007 he was named the UK DMC Champion. And his first major win, in 2003 he became the Vestax & Radio 1 Drum & Bass Movement Champion.

JFB has performed at an array of major events as well, including UK’s Glastonbury Hell Stage Shangri-La, Boomtown’s Banghai Palace and Ghetto Funk’s own festival Shindig. Internationally he has taken stage at s Shambhala (Canada), Rainbow Serpent, Earth Frequency, Rabbits Eat Lettuce (Australia) and Wicked Summer Fest (Italy).  In 2012 he scratched at the London 2012 OLYMPICS BMX arena and for the UK NFL Fan Rally in Trafalgar Square. More recently he landed the DJ residency for for the ISL (International Swimming League) that has toured and been broadcasted all over Europe.

As you can imagine, such accomplishments have landed JFB some hefty affiliations including Pioneer DJ, Serato, Rane, Reloop & DJ City. All of which are well deserved. This is all the more reason to make your way to Trill Hip Hop Shop for this month’s Fader Manners. If you love DJing and turntablism, or even if you are just curious about it, then this is an event you need to add to your to-do list.

This all goes down Friday, February 18th from 5pm until 9pm at Trill Hip Hop Shop. Remember, this isn’t just a performance. Fader Manners is a Monthly dedicated to the DJ/Turntablist Art form with the intention uniting DJs of all skill levels to scratch, talk, laugh, & create camaraderie. All skill levels are welcome and multiple turntables will be set up for any in attendance to utilize. So roll through, catch a performance by one of the world’s most talented DJ/Turntablists, and have some fun!

For more information about the event check out the event page here on the Trill Hip Hop site, or on Facebook here. See you there!