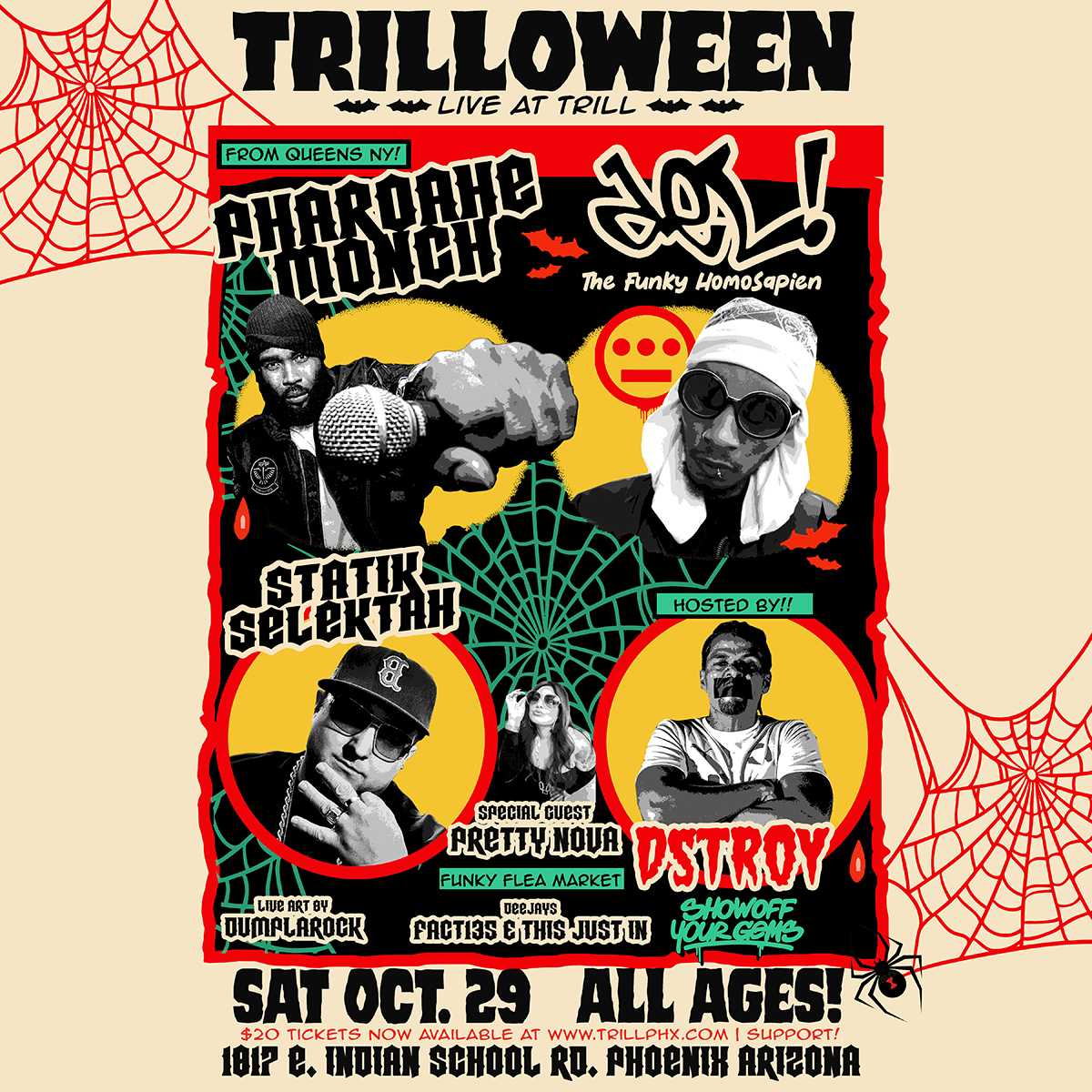 Trilloween 2022 is locked and loaded with performances by hip hop legends Pharoahe Monch, Statik Selecktah, and Del The Funky Homosapien! As usual the event will be hosted by the one and only D-Stroy of the Arsonists, Showoff Your Gems, and The Lord Sear Show (Sirius XM). There will also be a Funky Flea Market in the side parking lot with vendors selling streetwear, new & used vinyl, collectibles, patches, pins, and everything else.

Pharoahe Monch hails from Queens, New York. He was a member of the classic hip hop group Organized Konfusion along with Prince Po. He later went on to sign with Rawkus Records as a solo artist and quickly became a household name with the release of his fist solo project, Internal Affairs. The Queen’s native went on to release 3 more solo projects, had several guest appearances and even started a band (th1rt3en) and released an album with them. He is highly regarded as one of underground hip hop’s most talented and original artists. We are very blessed to have him on the Trilloween 2022 line-up this year.

Statik Selektah hails from the greater Boston area. He started DJing and created some legendary mixtapes which he also utilized to champion many of his talented peers from in an around the area in which he grew up. As far as production, Statik’s resume is ridiculously long. He has worked with names such as Blacastan (R.I.P.), Termanology, Ransom, Action Bronson, Curren$y, Bun B, Reks, Stu Bangas, Royce Da 5’9″, and Kota The Friend just to name a few and is highly regarded as one of the best producers in underground hip hop.

Statik also runs a successful record label, ShowOff Records, as well as a radio show on Shade 45 (Sirius XM). His contributions to hip hop have been monumental to say the least. This will be the 2nd time he has joined us for a Trill event and we are beyond stoked to have him back as a part of Trilloween 2022.

Del the Funky Homosapien hails from Oakland, California. Del is a pillar of the West Coast underground hip hop scene. At 17 a young Del dropped his 1st album, I Wish My Brother George Was Here, produced by his cousin Ice Cube. The album was an instant classic. He is a member of the world famous Hieroglyphics Crew and a member of Deltron 3030 along side Kid Koala & Dan the Automator.

Del’s career has spanned more than 30 years. He has worked with a plethora of artists aside from his Hieroglyphics & Deltron 3030 family including Wu-Tang, Gift of Gab, Dinosaur Jr., Tame One, Amp Live, N.A.S.A. and Gorillaz just to name a few. This is a first for us over a Trill and we are beyond excited to have on the Trilloween 2022 line-up.

DJs Fact135 & This Just-in Will be providing additional support. We will also be adding more acts/DJs to the bill as the show gets closer, so make sure you keep an eye out for the additions!

This is an ALL AGES event, so bring the whole family! Kids 12 & under with an adult are FREE!!!