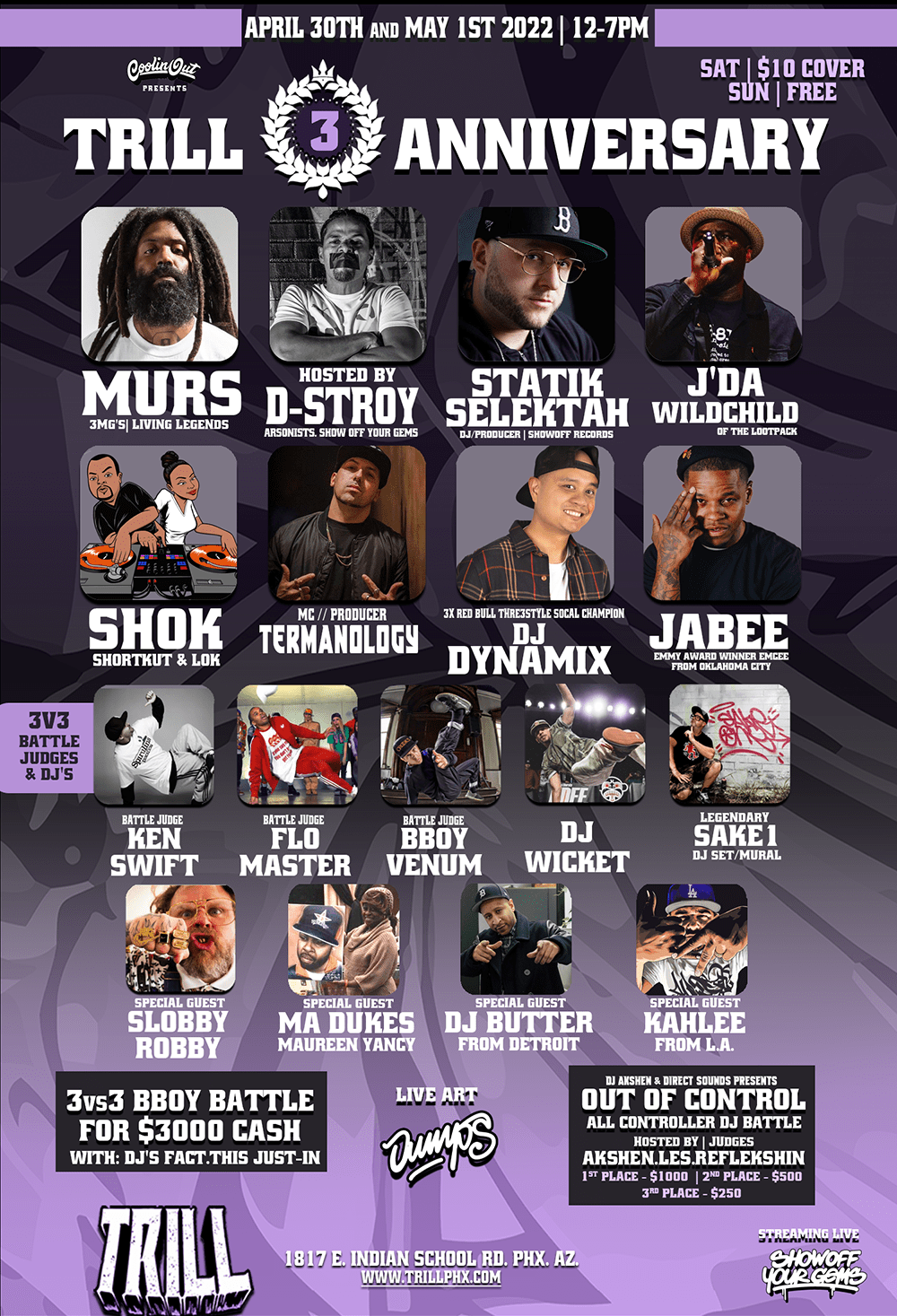 We are celebrating 3 years strong at our new location with a massive 2 day 3 year anniversary party at Trill Hip Hop Shop on Saturday, April 30th & Sunday May 1st.

Day one of the 3 Year Anniversary will feature a 3 vs 3 B-Boy battle for a $3000 cash prize. Judges include Ken Swift, B-Boy Venom and Flo Master. DJs for the B-Boy event will be B-Boy Wicket & Sake One. After the battle the performances will begin with Statik Selektah, Termanology, Murs, J’Da Wildchild of The Lootpack, Jabee, Shok! (DJ Shortkut & Lok), and Kahlee. Select vendors will be set up in the main parking lot including Slobby Robby from the Netflix series Slobby’s World and Maureen Yancey aka Ma Dukes from The J Dilla Foundation. There is a $10 cover required for Day 1 which can be purchased through the Eventbrite event page here.

Day 2 of Trill’s 3 Year Anniversary will include Arizona’s 1st controller only DJ Battle with participants from all across the country. Winner takes home $1000 Cash. Judging the battle will be DJ legends Shortkut, Lok, and Dynamix as well as local favorites DJ Reflekshin & Les735. The battle will be hosted by our very own, DJ Akshen. Shok! (Shortkut & Lok) and Dynamix will also be showcasing following the battle.

Hosting the 2 day event will be none other than D-Stroy of Showoff Your Gems & the Arsonists. Live art will take place both days by Dumps aka Dump La Rock & Sake One. Additional audio support will be provided by Coolin’ Out DJs Fact135, Akshen, Reflekshin, and This Just-In. Day 2 is FREE to all.

There is no doubt that Trill’s 3 Year Anniversary is going to be one of the biggest events in Arizona this year. Make sure to come through and support the culture and the shop and be a part of this historic event!

This is an ALL AGES event!